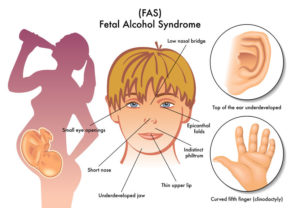 FASD is a set of physical, behavioral and cognitive disorders seen in people who were exposed to alcohol in the womb.  Alcohol is a teratogen, which is a substance that interrupts or alters the normal development of a fetus. Alcohol is especially toxic to developing brain cells and to structures that form along the mid-line of the body. The degree of brain damage due to prenatal alcohol exposure is dependent on many factors, with the first being the amount consumed. The greater the amount of alcohol used during pregnancy, the greater the risk of damage. Binge drinking can be especially harmful.

The second factor is the timing of the alcohol exposure. There can be different effects depending on what was developing at the time of the exposure. It is important to note that not all individuals with prenatal alcohol exposure will show the facial features (thin upper lip, indistinct philtrum, smaller eye openings [palpebral fissures]) because the face only develops over a short period during pregnancy. The central nervous system (CNS) develops from day 14 until birth, which means the probability of damage to the CNS is significantly greater. Some individuals are more resilient to prenatal alcohol exposure and suffer little or no consequences. Others are less resilient and all it takes is one negative change in their environment to significantly affect them. However, there is no way to know this until the child is born, and at that point the damage has been done. This is why there is no safe level of alcohol consumption during pregnancy.

Areas of the brain affected by prenatal alcohol exposure:

Frontal Lobes: This area is responsible for understanding the connection between current actions and possible consequences, emotional regulation, impulse control, judgment, understanding social cues and generalizing one’s learning. For example, someone with frontal lobe damage would be able to learn to safely cross the street in front of their house, but might not apply the same safe crossing techniques to the street in front of their school. People with normally functioning brains can learn to cross the street and apply it to all the streets they cross. This is because they are able to generalize their learning. Someone with an FASD might have to learn in each setting how to cross a particular street. People with frontal lobe damage might have a hard time understanding nuance and complex or abstract thoughts. Also, they might think very concretely and have significant difficulty with planning and problem solving.

Parietal Lobe: Just behind the frontal lobe is the parietal lobe. This area of the brain is thought to be largely responsible for interpreting sensory information, touch perception, understanding of spatial relationships, mathematical skills and planned movements such as writing.

Cerebellum: This area, located at the base of the brain just above the brain stem, is responsible for motor control, balance, coordination and movement. It is involved in functions of cognition (learning), attention and memory. It has also been shown to be involved in socialization and language skills.

Basal Ganglia: This area is one of many important structures located in the center of the brain. Damage to this area may involve spatial memory and behaviors like perseveration (repetition of or fixation upon a particular response, such as a word, phrase, or gesture, despite the absence or cessation of the stimulus), inability to switch modes, work towards goals, and predict behavioral outcomes. The understanding of the passage of time can be affected when there is damage to the basal ganglia. One strategy to help individuals with a FASD better understand the passage of time is to use a sand hour glass. This visual representation of the abstract concept of time can be very helpful to a person with an FASD and help them switch from one activity to another.

Hippocampus: This structure is located in the center of the brain. It plays a role in memory and learning, connects sensory input to motor output and is also involved in navigation. A person with an FASD may have an average IQ but still struggle in school. Individuals with an FASD struggle with the “tip of the tongue” feeling due to poor memory and are often labeled as inattentive before being diagnosed.

Hypothalamus/Brain Stem: Controls appetite, emotions, temperature, pain sensation, and organizes behavior related to survival (fight or flight response). The ability to sleep is a brain stem function and many people with an FASD will have problems transitioning from wakeful activities to sleep and/or they may have problems staying asleep. Individuals with an FASD might need reminders to wear warm clothing during cold weather. Some will overeat due to not being aware of their sense of being full and others won’t eat because they are not aware of feeling hungry.

Corpus Callosum: Located in the center of the brain, the corpus callosum connects the left and right hemisphere and allows messages to be passed from back to front, left to right and vise versa. It brings information from different parts of the brain together so it can be processed and behavior can be regulated. When the corpus callosum is damaged or missing altogether, the information from the left side might not stop a behavior that originated on the right side. For example, a person with an FASD might know a particular rule and even be able to repeat it verbatim, but the processing problems in their brain may not allow for that information to stop their behavior in time, which can lead to rule breaking.

DEVELOPMENT OF A BABY

This is a chart that lays out the development of a baby and shows the vulnerability of the fetus to defects during different periods of development.  The dark red portion of the bars represents the most sensitive period of development, during which teratongenic effects on the sites listed would result in major structural abnormalities in the child. The yellow (lighter color) portion of the bars represents periods of development during which physiological defects and minor structural abnormalities would occur. – Source:  National Organization on Fetal Alcohol Syndrome (NOFAS), 2004; Adapted from Moore, 1993.